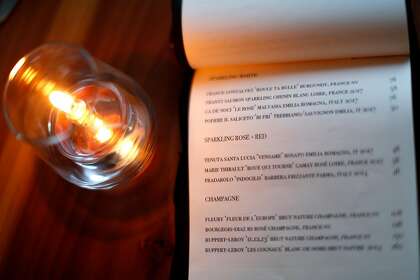 Wine lists are confusing to read, even when they’re written in a clear and organized way, like this one from Lord Stanley restaurant in S.F.
Photo: Scott Strazzante / The Chronicle

It’s true. Restaurant wine lists are really hard to read. Most of them are about as legible as your average tax law document.

This fact erupted on Twitter late last week, when New Yorker food correspondent Helen Rosner tweeted a photo of a laughably confusing wine list, complaining that “I am an actual professional restaurant eater and I still have no ducking (sic) clue which of the many many words on a wine list is the one word I’m supposed to say to indicate that this is the wine I want a glass of.”

The hundreds of replys ranged from defensive (“This is anti-intellectualism!”) to reasoned to “Im dead ass crying” (that would be @hotcheezbox). Not everyone understood Rosner’s actual point, which was that “wine lists are word soup”: If you wanted to order the bottle listed as “Chateau de Beru Chablis Monopole Clos Beru,” would you know which word(s) to say?

As a number of Twitter users noted, the wine list in question is a garbage one. Not only is it semantically inconsistent (sometimes leaving out the appellation; omitting the grape variety where it would have been helpful), but it is also overpriced. The larger issue, of course, is that it looks designed to intimidate, as if it’s standing ready to remind you that you don’t know enough about these individual wine producers to know whether the word “Chnaploid” is a vineyard or a grape or just some French guy’s made-up word. (I had to Google it, and I’m pretty sure it’s the latter.)

The thing is, Rosner’s wine list is only a marginally worse specimen than your typical American wine list. The whole literary form is so broken and wonky, in fact, that I’m not sure why more people don’t make fun of it.

I’m not saying it’s easy to make a good wine list. The writer of the list has to provide enough information about each wine to knowledgeable customers while also making it accessible to novices. The bigger problem, maybe, is just the nature of wine taxonomy. We refer to Chardonnay from Sonoma as “Chardonnay” but Chardonnay from Burgundy as “white Burgundy”; to Chenin Blanc from South Africa as “Chenin Blanc,” but “Vouvray” if it’s from a specific part of the Loire Valley. Some wines have a cuvee name (e.g. “Chnaploid”), but many don’t. Nearly every bottle demands a different syntax.

So what makes a wine list user-friendly? Many responses to Rosner’s tweet suggested that simply putting a single word in bold would help a diner know how to identify a bottle. But some Bay Area restaurants do much better than that. I love the layout of the Lazy Bear list, for example, which makes it very clear what’s a winery name, what’s a grape name and what’s everything else. It takes up a lot more space, but the legibility is worth it.

The more potent trend among wine lists, though, is a stylistic categorization. Sometimes this is pretty straightforward, like at Mister Jiu’s, where reds and whites are each organized by light/medium/full. Sometimes it’s a little more specific, like at Dear Inga (“fresh and lively whites,” “plush and round whites,” “light and aromatic reds,” etc.) or the Slanted Door (“herbal and dry whites,” “earthy and spicy reds,” etc.).

Possibly my favorite organization scheme in the Bay Area, however, belongs to the Morris’ wine list, which is a beautiful, meandering reflection of owner Paul Einbund’s personal taste in wine. Some sections of the list are geographic (Northern Rhone reds), others are producer-specific (he has a whole two-page chapter devoted to the white wines of Ganevat, a winery in France’s Jura) and others are so wildly specific that you can almost taste them, like “crazy bright, crisp, mineral-driven Burgundy.”

Normally wine lists are a precursor to deliciousness. But that’s the rare wine list that can actually make you salivate just from reading.

P.S. I have a story out this week about a strange dispute between a vintner and his environmentalist neighbor in Napa Valley’s Atlas Peak area. A controversy over whether a vineyard planting would destroy vernal pools eventually led to a libel lawsuit, restraining orders and, allegedly, bullet holes. Read it here. 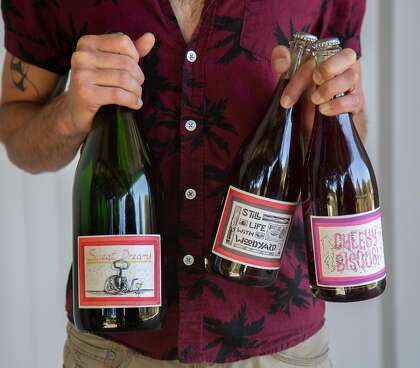 While we’re on the subject of great wine lists, I was in Santa Cruz last weekend and stopped into Bad Animal (1011 Cedar St., Santa Cruz) for a pre-concert drink and snack — and was completely unprepared for how charming it would be. It’s a bookstore as well as a wine bar and restaurant (plus it has a few retail shelves), and as a wine-loving book nerd, it totally has my number. I munched on a big spread of crudites with honey-miso dip alongside a glass of delicious 10-year-old pet-nat, which had enough richness and tension that it could have almost passed for Champagne, and then had a hearty slice of chicken liver mousse toast with a glass of the Stagaire Sweat Dreams, a wildly tropical blend of Contra Costa Chardonnay and Muscat from Santa Cruz winemaker Brent Mayeaux.

In anticipation of SF Beer Week 2020 (Feb. 7-16), we’re getting ready to induct a new class of beers into The Chronicle’s NorCal Beer Hall of Fame. We’re asking for readers to vote on which five beers should be canonized in 2020, so cast your vote! The poll is open through Feb. 1. And stay tuned for a lot more Beer Week coverage, coming soon.

• It looks like some of the wine tariffs have been avoided, at least for now. President Trump reached a truce with French President Emmanuel Macron earlier this week, agreeing to hold off on tariff escalation in exchange for an easing of France’s Digital Services Tax. The other set of tariffs affecting a broader range of European Union goods could still go through; meanwhile, a 25% tax on European wines that took effect last October is still in effect.

• Another famous Bordeaux family has set roots in Napa Valley. Daniel and Florence Cathiard, who own Chateau Smith-Haut-Lafitte, have purchased Flora Springs winery, Wine Spectator reports. The deal comes with 280 acres of land.

• Elsewhere in Wine Spectator: The smoke taint lawsuits are coming in. Vintage Wine Estates and Kunde Family winery have sued their insurance companies for refusing to compensate them for grapes lost to smoke taint. (Here’s more on smoke taint.)

• I’ve enjoyed nice examples of pechuga, a type of mezcal that’s distilled with a chicken or turkey breast. In Punch, Noah Arenstein explains why this traditional spirit might be flying off the rails, as producers eschew the traditional poultry and instead add ingredients like pineapple and mango and even iguana and snake.

• On The Press, Mike Dunne has a complete guide to the top wineries of Calaveras County, a beautiful section of the Sierra foothills that’s located conveniently on the road between the Bay Area and winter destinations like Bear Valley and South Lake Tahoe.