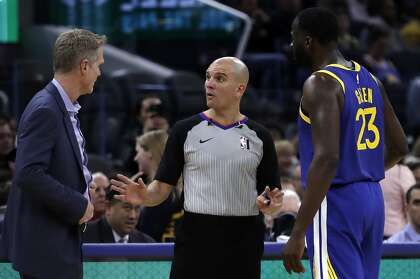 After he was assessed a technical foul for slamming the ball down Wednesday night, Warriors forward Draymond Green turned toward referee Jacyn Goble and said, “You don’t think I’m frustrated?”

There is perhaps no better gauge for how much this season has tested Green’s patience than his technical-foul count. With 36 games left, he leads the NBA with 12 techs — just four shy of an automatic one-game suspension.

Even though the Warriors own a league-worst record of 10-36, Green has no intention of getting suspended. His track record suggests that, when he gets close to the 16-tech threshold, he knows how to calm down around the referees.

Two seasons ago, Green picked up his 15th tech in a March 9 loss to Portland and didn’t get another one the rest of the way. Last season, he again got 15 techs, only to sidestep a suspension.

Asked how he’s been so successful avoiding that 16th tech, Green said, “You just know what you’re facing and make adjustments.”