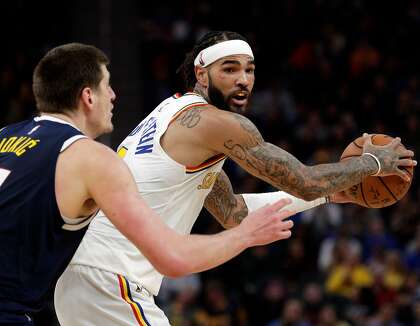 Willie Cauley-Stein (2) looks for a teammate to pass to In the first half as the Golden State Warriors played the Denver Nuggets at Chase Center in San Francisco, Calif., on Thursday, January 16, 2020.
Photo: Carlos Avila Gonzalez / The Chronicle

The Warriors are finalizing a trade that will send center Willie Cauley-Stein to Dallas for a 2020 second-round pick, a league source confirmed with The Chronicle.

In July, Cauley-Stein signed a two-year, $4.4 million contract with Golden State, with a player option for 2020-21. By unloading that deal, the Warriors will drop $2.57 million below the hard cap and save $5.66 million toward the luxury tax.

Before Friday, the Warriors didn’t have a second-round pick in six of the next seven drafts. But the pick acquired from Dallas, which will probably be in the 50-60 range because it initially belonged to Utah, is a minor asset when compared to the roster implications of dealing Cauley-Stein.

The Warriors already have 11 players under contract for 2020-21, which leaves only four open spots. With Cauley-Stein now gone, Golden State has enough room under the hard cap to convert the two-way contracts of both center Marquese Chriss and point guard Ky Bowman to standard NBA deals.

It’s also possible the Warriors could only convert Chriss’ deal, keep Bowman on a two-way contract, and use the 15th roster spot on a player from outside the organization. If he stays on a two-way deal, Bowman, who’s 42 days into his 45-day limit with the NBA club, could re-join Golden State once the Santa Cruz Warriors’ season ends March 28.

Teams can retain the rights to players signed to two-way deals, allowing them to become restricted free agents in July. If the Warriors convert both of their two-way contracts to standard NBA deals, they won’t be able to fill the two-way contracts this season because the deadline to do so has passed.

In 41 games with the Warriors this season, Cauley-Stein averaged 7.9 points, 6.2 rebounds and 1.5 assists. According to a league source, Golden State believed he could be a solid rotation player for a 2020-21 team that will try to return to contention. However, it ultimately prioritized the salary-cap flexibility that shedding his contract provided.

Chriss got the start Friday night against the Pacers, but head coach Steve Kerr said the starting-center job could fluctuate between Chriss and Spellman. In Dallas, Cauley-Stein figures to replace center Dwight Powell, who suffered a season-ending Achilles tear in a loss to the Clippers on Tuesday, in the starting lineup.

“It’s never an easy time as a player,” Kerr said of waiting for the Feb. 6 trade deadline to pass. “I played on a lot of teams, six teams in my 15 years. There’s always a time where you get a little nervous.

“That’s one of the biggest things you do as a coach is you make sure you’re communicating with guys and staying in touch with everybody. You’re making sure everyone’s OK, but also acknowledging the realities of our job and our work.”