How Warriors’ Jordan Poole got his rookie season back...

Warriors guard Jordan Poole was 17 years old when he deleted his Twitter and Snapchat accounts.

Fresh off moving from his hometown of Milwaukee to rural Indiana for prep school, Poole knew he needed to avoid all distractions to land high-major Division I scholarships. Now a rookie guard with the Warriors, Poole, 20, has only one social-media account: an Instagram he occasionally visits to watch cat videos.

By staying offline as much as possible, he shielded himself from a barrage of criticism earlier this season. As Poole slogged through a two-month-long shooting slump, many Warriors fans took to Twitter and message boards to question whether Poole — the No. 28 pick in June’s NBA draft — belonged in the league, much less in Golden State’s rotation.

Many of those same critics are now lauding Poole as a potential steal. A little less than three weeks removed from a G League stint that helped him rediscover his shot, he is showing why the Warriors used a first-round selection on someone widely projected to go in the second round or undrafted.

During a recent four-game stretch, Poole averaged 15.3 points on 43.1% shooting (41.9% from 3-point range), 2.8 assists and 2.5 rebounds in 23.8 minutes. Long known for his shot-making, he has pushed the limits of his offensive repertoire, flashing a court awareness and passing ability that he seldom showed in two seasons at Michigan. 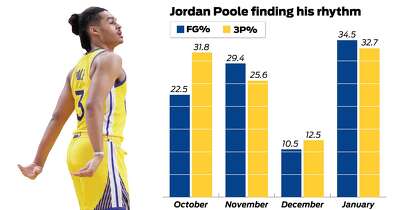 Poole believes his sudden resurgence speaks to the faith the Warriors have in their young players. In a league filled with teams quick to give up on draft picks, head coach Steve Kerr’s staff understands that, more than any shooting mechanics or game plans, self-belief is paramount for rookies. Once a player starts to think he doesn’t deserve an NBA contract, he tends to play himself out of one.

It didn’t take Poole long to learn about the fickle nature of NBA fans. After totaling 36 points in his first two preseason games, he was praised for his confidence. Three months later, when Poole was sent to the G League to iron out his approach and see some shots go in, he was being called a “bust” — quite a strong label for someone who heard 27 names called before his on draft night.

Though Poole didn’t visit online message boards or read the stories being written about him, reporters ensured that he was aware of the negative feedback. Making matters tougher was that, with the Warriors’ roster thinned by injuries, Kerr was forced to let Poole play through mistakes.

As misses mounted, Poole began to press. Far too often, he deviated from the Warriors’ motion principles, lacing dribbles between his legs before he hoisted off-kilter jumpers. His shooting clip in December was 10.5%.

“I felt that he added a little too much nuance to his game,” assistant coach Ron Adams said. “Rather than just coming off a screen and shooting the ball, he would dribble and drive. To get back on track, he really just needed to simplify things.”

After Poole scored 20 points in a Nov. 29 loss in Miami, he was surprisingly curt with reporters, responding to a question about his big night with six words: “The ball went in the hoop.” Video of the exchange rippled through the blogosphere and portrayed him as immature.

It was a minor incident, but his teammates recognized it for what it was: The scrutiny that comes with being in the NBA had taken a toll on someone not old enough even to drink.

Draymond Green, who purposely positioned his locker stall next to Poole’s at the start of training camp, encouraged Poole to “be who you are” and “don’t let anybody try to change you.” Klay Thompson told him about his prolonged shooting slump last season that had drawn plenty of negative media attention. Stephen Curry reminded Poole that, long before he was a two-time MVP, he was a scrawny rookie struggling to adjust to the NBA.

Such support helped Poole understand that, over the course of an 82-game season, all players are bound to endure ruts. His just happened to come at the start of his NBA career.

“It doesn’t always happen right away,” said assistant coach Chris DeMarco, who has worked closely with Poole. “The NBA game is so much different than anything else you’ve done before: the terminology, understanding personnel, understanding what players’ strengths and weaknesses are. We all recognize that, and this whole organization never lost confidence in him.”

Late last month, Poole headed to the G League, in which he was put in more of a playmaking role. Free to organize the offense and dictate the tempo against lesser competition, he averaged 26 points on 46.3% shooting (42.3% from 3-point range) in three games.

By the time Poole returned to Golden State, he had eliminated many of the extra movements that previously had hurt him. In the waning seconds of overtime Monday in Portland, Poole got the ball in the corner and, heavily guarded by Mario Hezonja, attempted a game-tying 3-pointer.

The shot was long, but Kerr appreciated that Poole had the self-belief to take it.

“Having confidence goes bigger than basketball,” Poole said. “If I lose that, I lose who I am as a person. I’m just lucky to be in a situation where my coaches and teammates want me to be me, win or lose.”