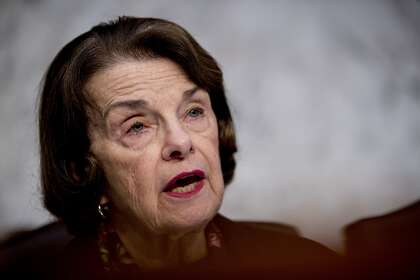 WASHINGTON — Sen. Dianne Feinstein returned to the Senate floor Thursday for the fourth day of President Trump’s impeachment trial after leaving early the night before due to illness.

Feinstein walked into the chamber a few minutes late, after the opening prayer and Pledge of Allegiance. She coughed and quickly exited for the Senate cloakroom, returning moments later as she stuffed tissues into her pocket.

On Wednesday, the California Democrat left the trial about an hour early as House impeachment managers made their opening arguments. A spokesman said she felt “under the weather.”

Feinstein and her 99 colleagues are required, under impeachment rules, to sit silently for the marathon arguments in Trump’s case. Wednesday’s session ran nearly 10 hours, and the trial is likely to continue at least through next week.

At 86, Feinstein is the oldest member of the Senate, and she ranks fifth in terms of seniority.