For decades, San Francisco’s Cow Hollow neighborhood was the stinkiest place in town.

Slaughterhouses and tanneries dumped raw sewage into the nearby bay. Prevailing winds wafted the stench of a coastal garbage dump into the rolling valley. And yes, cows roamed the land that would someday cradle the city’s glitziest shopping district. Lots of cows.

About 800 cows, in fact — so many that city officials decided to banish the area’s dairy farms in 1891. The malnourished cows, feeding on the sand hills’ sparse vegetation, were defecating in their drinking supply and producing milk ridden with E. coli.

“If someone were to start out and search California from end to end,” said health officer James W. Keeney in one 1900 account, “they could hardly find a more unsuitable place in which to keep cows than ‘Cow Hollow.’”

Hold that rancid iteration of Cow Hollow up against the current one — polished, chic, a whiff of elitism in the air — and the waves of change that have reshaped San Francisco over and over come crashing to your feet. These days, Cow Hollow factors into the highest-priced ZIP code in one of the world’s most expensive cities, a place dotted with Victorian mansions, wellness centers and Lululemon leggings.

But now the cows are coming home. Sort of. 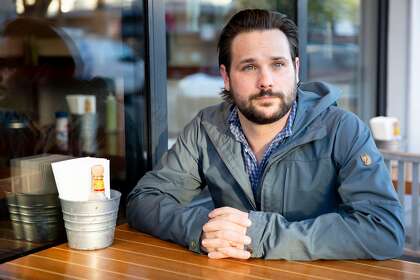 Chris Cheeseman, a managing partner of Tacko, worries that the Shake Shack on Fillmore Street could harm his business across the street.
Photo: Santiago Mejia / The Chronicle

Shake Shack, the New York hamburger chain, is set to open its first San Francisco location in late January or early February. Its Cow Hollow outpost on the corner of Fillmore and Filbert streets marks a final frontier of sorts for a corporation that has expanded to 275 locations around the globe, including 18 in California, its reach spanning from Manhattan to Moscow to Shanghai.

Opening in Shake Shack’s adjoining building will be Rumble Fitness, a boxing-fitness chain that also got its start in New York City, and Indie Superette, a small, health-focused market owned by San Francisco restaurateur Michael Mina.

Shake Shack’s arrival brings more than burgers and crinkle-cut fries. To the most stubborn San Franciscans, city officials’ embrace of a New York City corporate chain restaurant feels like a surprise uppercut to a town that prides itself on all things homegrown, organic and unconventional. To opportunistic entrepreneurs, it signals a much-needed development in an ailing retail corridor desperate for a boost.

Then there are observers somewhere in the middle. Enthusiasts comprising the eatery’s cult following — some donning limited-edition Shake Shack sneakers — braved a three-hour line for the grand opening of the first Bay Area location in Palo Alto in December 2018. Others may stroll past the new site in Cow Hollow and ask, “So what?” San Francisco already has plenty of burger joints. Is this really a big deal?

The answer for many: Yes.

“It’s shocking,” said Karl Hasz, who served as a commissioner for the Historic Preservation Commission of the San Francisco Planning Department for 12 years. “Shocking doesn’t mean disappointment or shocking in a good way, either. It’s just a change in the city that we never thought would happen.”

The first thing you notice about people in Cow Hollow is that they’re all from New York City. Or at least that’s how it felt on a Sunday afternoon in the fall, when three of the first four passersby I stopped outside Shake Shack claimed ties to the Big Apple.

Vani Chopra and her husband, Aditya Amonkar, lived in New York for six years before moving to Lower Pacific Heights.

“I’m not sure if I’m crazy about burgers,” said Chopra, 35. “But I’m just happy Shake Shack’s opening because I associate it to where we lived before.”

“I think (New York is) a much better-run city,” Pearl declared. “Better places to eat, places to shop. People can afford to live there and eat there.”

Of course, opening a chain restaurant in a San Francisco neighborhood is about as simple as penetrating the gates of Helm’s Deep in “Lord of the Rings.” In a bid to protect mom-and-pop shops, voters approved a 2006 ballot measure, Proposition G, that requires any retailer with 11 or more locations worldwide — known as formula retail — to obtain special permits for operation in commercial districts outside of downtown. The permits, called conditional-use authorizations, entail a months-long slog through city reviews, hearings and fees.

Regulations are looser in the redevelopment areas around downtown. In general, the farther a chain store proposal ventures from Market Street, the more likely it will be devoured by the jaws of the City Planning Commission. In 2018, the commission rejected a proposal for a Whole Foods in Russian Hill, ending a four-year fight won by residents who complained the store would dilute their neighborhood’s character and harm smaller grocers.

“We’ve fought these chains over and over,” Hasz said. “Are we now saying that it’s OK?”

Shake Shack’s introduction to Cow Hollow was similarly rough. Neighbors clamored for a grocery store to replace the Real Food Co. that shuttered on Fillmore and Filbert streets in 2016, but nearly 20 prospective grocers balked at the building’s narrow layout and lack of parking, according to Alec Paddock, a development manager for CenterCal Properties.

So Paddock held an on-site meeting in late 2017 to present a new vision: Forget about your grocery store. How about a couple of East Coast chains instead? 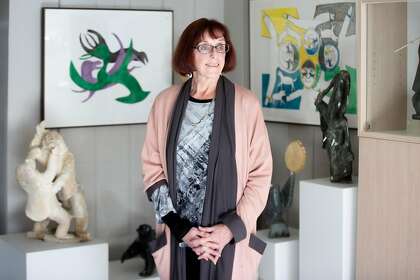 Since then, some locals have warmed to the idea of a restaurant that promises premium ingredients and carefully selected relationships with local suppliers. But members of the Golden Gate Valley Neighborhood Association remain unswayed.

“Corporate chains are not something that those of us who were born and raised here, or have lived here their whole voting lives, as I have, jump up and down about,” said Serena Bardell, vice president of the neighborhood association. “I don’t see any positive about it.”

Union Street, situated a block uphill from Shake Shack, long stood as the virtual Madison Avenue of San Francisco, a shopping mecca pulsing with fashion boutiques, beauty salons and, yes, restaurants. But the corridor’s vacancy rate has risen steadily over the last five years, climbing from below 1% in 2013 to 5.2% in 2019, according to real estate data firm CoStar, which measures vacancy rates by square footage. The Office of Economic and Workforce Development, which measures vacancy rates by empty storefronts, pegged Union Street’s 2019 rate at 11.1%. From 2018 to ’19, the corridor’s empty storefront total rose from 25 to 32.

“If we don’t adopt change then we’re just going to be another stale city,” said Rodney Fong, president of the San Francisco Chamber of Commerce. “I’m certainly not an advocate of all retail being formula retail, but the combination of mom-and-pop, entrepreneurial and formula retail works for San Francisco.”

‘That could take us out’

On a rainy Thursday afternoon in November, Chris Cheeseman and two colleagues made the 20-minute drive north into Larkspur, curious to behold their impending competition. Cheeseman is a managing partner of nautically themed Mexican joint Tacko, located across the street from Shake Shack’s Fillmore spot. At the Larkspur Shake Shack, Cheeseman ordered a chicken sandwich and a chocolate-and-vanilla frozen custard from one of three touchscreen kiosks. He figured the food would be tasty — he’s a longtime admirer of Shake Shack founder Danny Meyer — and it was.

But then he started noticing the telltale signs of an unwitting outsider barging into eco-obsessed California: Employees were cleaning tables with disposable wipes and tossing them in the garbage. Beer and wine was being served in plastic cups. The silverware was plastic, too. Compost bins? Nowhere in sight.

To Cheeseman, the subtle transgressions embodied a corporation that values maximum profit over local values. No longer was San Francisco the place he happened upon in 2008, an incubator of plucky entrepreneurs and small businesses. The only ones who can weather the city bureaucracy’s gale-force headwinds, it seemed, were the Shake Shacks of the world.

“I don’t know how much more this is going to occur, or how many more publicly traded restaurants or large groups are going to come into the city,” said Cheeseman, who helped Tacko open in 2011. “But it definitely takes away from what had made San Francisco San Francisco.”

Cheeseman worries that Shake Shack, whose price points and fast-casual model echo Tacko’s setup, could siphon 10 to 20 percent of his store’s revenue, which would spell trouble.

“A place like this opens up, that could be the X-factor,” he said during a conversation at his restaurant, as he glanced across the street. “That could take us out.”

Other neighbors seem less concerned. Super Duper Burgers, a Bay Area favorite slinging locally sourced patties since 2010, assumes a defiant posture five blocks away in the Marina. Its co-owner, Adriano Paganini, does not fear the competition.

“I’m excited for people to compare Super Duper to Shake Shack and conclude that Super Duper is the better product,” he said.

Still, Paganini was puzzled to learn about city officials’ reception of the corporate newcomer. Super Duper recently had a new location lined up in Laurel Village, but because its 15 stores classify the restaurant as formula retail, the new space sat empty while Super Duper crawled through the conditional-use permit process. In the meantime, a nonformula retail store butted in with a quick offer, and the landlord kicked Super Duper to the curb.

Super Duper is not the only local chain restaurant feeling disadvantaged. Mixt, a fast-casual salad chain with an outpost one block from Shake Shack’s new site, has been mired in the conditional-use process for a new location in San Francisco for over a year. Its co-founder, David Silverglide, believes larger operations like Shake Shack are better positioned to endure the costs.

“It’s certainly easier to expand outside the city than it is in our home city, which is really unfortunate,” Silverglide said. “That’s a shame for a local business, to say that I can’t open any more restaurants in my home city.” 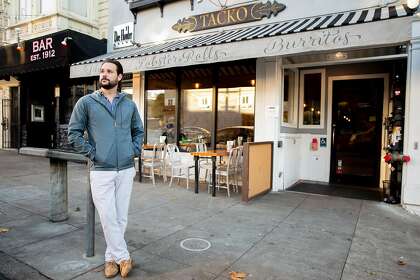 Chris Cheeseman stands in front of Tacko, where he is a managing partner, on Fillmore. The new Shake Shack is across the street.
Photo: Santiago Mejia / The Chronicle

Beep’s Burgers owner Samantha Yen Wong has no qualms with Shake Shack. The quirky Ingleside drive-in, established in 1962 and decidedly not a chain, is doing just fine, thanks, even as larger forces surround it on all sides. There’s a Whole Foods across the street, and a Philz Coffee next to that, and a McDonald’s looming down the block.

Wong says Ocean Avenue has gotten cleaner and safer over the last few years. It’s a welcome development — yet there exists a lingering sense of unease among some of her regulars.

“I feel like a lot of the residents in this area are kind of scared of the change,” Wong said. “They think it’s going to be too gentrified and lose that San Francisco feeling, that old-town feeling where there’s a lot of memories.”

Back in Cow Hollow, a fifth-generation San Franciscan named John Hanford nursed an herbal iced tea in a parklet on Filbert Street, the sun baking a cloudless Sunday in November. He reclined against the wood-paneled backing of a vintage Citroen H-Van, a clunker that had been given new life — sawed in half to bookend a sleek outdoor seating area with built-in benches, plant beds and bike parking.

Asked about the shifting cultural landscape of the city by the bay, Hanford, 62, gazed across the street at Shake Shack and paused — then landed on what may be his town’s essential contradiction.