The Chinese roots of plant-based meat

With the rise of the Impossible Burger, fake meat is making national headlines.

In many Chinese restaurants, however, fake meat is old news. Chinese mock meats have been around for centuries as a staple in Buddhist diets. They successfully mimic the texture of meat, though they don’t bleed like the Impossible Burger, nor are they winning any climate justice awards or attracting parades of investors.

Instead, more than a dozen Chinese vegetarian restaurants in the Bay Area have quietly been serving local Chinese communities, vegetarians and vegan folks for years. They use faux meats typically made out of soy products, wheat gluten or tofu, often imported from Taiwan but sometimes made in-house.

“In Asia, we have been eating mock ‘meats’ for many years — mock shrimp, mock chicken, mock duck. It’s so popularly consumed on a daily basis that people don’t think twice about it as a vegetarian cuisine,” said Minh Tsai, the founder of Hodo Foods in Oakland.

As the general population becomes more interested in vegetarianism, more Chinese vegetarian businesses are arriving, too — although not at the same rate as high-tech fake meat startups. Recent additions include VegeFarm, a Taiwanese market in San Francisco’s Sunset District specializing in vegan meats such as ground pork, beef jerky and remarkably realistic looking abalone; and Joyheart Cafe, a San Jose restaurant and grocery store with dishes like braised eel over rice.

Meanwhile, more established Chinese vegetarian restaurants like Nature Vegetarian Restaurant, which opened in 2012 in downtown Oakland, are still going strong. Hui Lin opened the restaurant with her husband, chef Jian Wu Liu, after having a conventional Chinese restaurant in the same location. Due to personal health reasons, Lin wanted to try making vegetarian food and eventually transitioned to a vegetarian diet.

Their menu is similar to a typical Americanized Chinese restaurant, except everything is vegetarian. Their soy-based sesame chicken comes with a familiar ring of steamed broccoli. Lin’s husband makes some of the imitation meat used in their dishes, including beef, char siu and lemon chicken, created from house-made wheat gluten. It might be the only place in the Bay Area serving an all-vegetarian dim sum menu, which is available on the weekends. 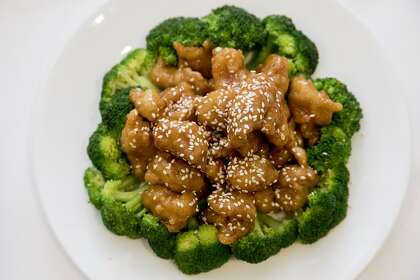 The Sesame “Chicken” comes with a familiar ring of steamed broccoli at Nature Vegetarian Restaurant. The mock meat is made of soy.
Photo: Jessica Christian / The Chronicle

While Lin did not open the restaurant for environmental reasons, she now says that climate change is a big issue for her and the restaurant’s community. As plant-based meats have become more mainstream and there’s more interest in the link between food and climate change, Nature Vegetarian’s business has risen.

“You see our weather changing dramatically because of climate change,” she said in Mandarin. “We hope more people eat vegetarian.”

About 80% of Nature Vegetarian’s clientele is not Asian, Lin said. Each year, they cater events for animal rights and environmental groups. She sees more young people frequenting her restaurant. She thinks it’s because her food is affordable — lunch specials, which include an entree, rice, soup and an egg roll, cost only $8.50 — but also because Millennials are more likely than older generations to choose plant-based meats, according to multiple studies.

In Taiwan, Chinese vegetarian dining establishments are a common restaurant category, one that non-vegetarians also frequent. It’s common for Buddhists who are not vegetarian to observe the practice of eating a vegetarian diet on the first and 15th day of the lunar calendar. Among some Buddhists, after a close family member dies, the rest of the family eats vegetarian food for 49 or more days.

“Taiwanese culture has really preserved its religious roots,” said Cathy Erway, a food writer and author of “The Food of Taiwan.” “A lot of restaurants have the Buddhist symbol, which looks like a reverse swastika, which means it’s a vegetarian restaurant.” 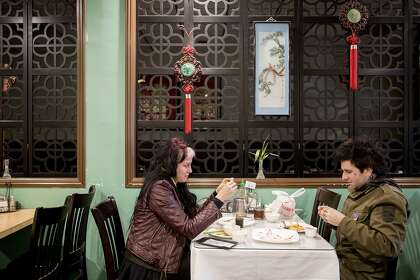 A couple read their fortune cookies at the end of their meal at Nature Vegetarian Restaurant in Oakland.
Photo: Jessica Christian / The Chronicle

These vegetarian dishes, however, play a much bigger role than just temple food.

“These foods are found every day on tables not necessarily because it’s vegetarian or because it’s Buddhist, but because they’re just enjoyed,” Erway said. “Mock duck or tofu skin are enjoyed for their own distinctive textures and absorbing qualities of sauces.”

Hodo’s Tsai agrees. He has been making artisanal, organic tofu products for 15 years, yet he doesn’t preach vegetarianism. He also doesn’t bill his tofu as an exclusively Chinese ingredient. His Thai Curry Nuggets, Moroccan Tofu Cubes and thin yuba sheets (tofu skin) can be incorporated into a variety of cuisines.

“We’re not prescriptive, like you should do this or do that,” Tsai said.

Even though meat alternatives are gaining more mainstream popularity, it remains to be seen whether Chinese mock meat will take off. Erway said she thinks there’s still reluctance to embrace these soy and wheat gluten products, but “vegetarian cuisines and ingredients will continue to be looked at as inspiration as people try to eat less meat.”