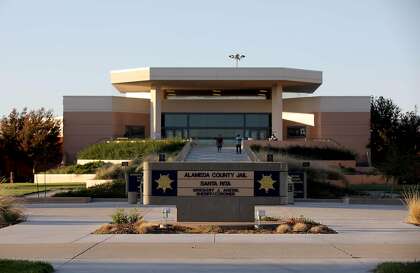 The inmates, who were not identified, told deputies they found a small bag of fentanyl at a courthouse when they were transferred for a recent court appearance, said Sgt. Ray Kelly a spokesman for the Sheriff’s Office.

Deputies found one inmate overdosing in a cell inside Santa Rita Jail in Dublin sometime Thursday or early Friday after other inmates flagged them down about a person having a medical emergency, Kelly said. Deputies then discovered a second inmate with overdose symptoms.

The deputies quickly gave the inmates doses of Narcan, the common brand name of naloxone. Paramedics took both inmates to a hospital and they are expected to recover.

“Fentanyl continues to be a very dangerous drug,” Kelly said. “We are encountering it now more than ever.”

The cases mark the second and third instances when Alameda County Sheriff’s deputies have used naloxone to revive a person overdosing this year, he said.

Deputies have successfully administered Narcan more than two dozens times since they started carrying it in 2018, Kelly said.

“We are seeing a tremendous amount of this substance.”

The rescues come fentanyl has increasingly poured onto the streets of the Bay Area. In San Francisco, fatal overdoses from fentanyl more than doubled in 2019.