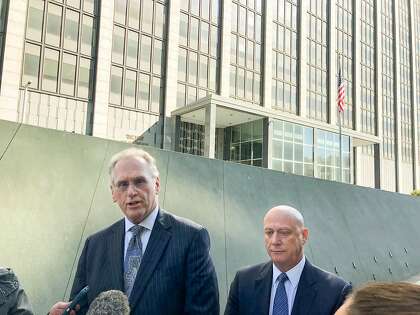 PG&E may later be barred from paying bonuses to any executives or managers unless the company meets certain fire safety goals, a federal judge said Friday.

U.S. District Judge William Alsup ordered Pacific Gas and Electric Co. to show why he should not force the company to tie “all bonuses and other incentives for supervisors and above” solely to the utility’s fulfillment of its state-mandated fire-prevention plan “and other safety goals.”

The order came in response to PG&E’s admission this month that it fell short on some of the commitments outlined in its fire plan last year. Afterward, Alsup said he might require PG&E to directly employ enough tree trimmers, rather than relying on contractors, to make its power lines safer.

Alsup is overseeing PG&E’s probation stemming from the 2010 San Bruno pipeline explosion. He has expanded the probation terms to include compliance with the fire plan approved by state regulators.

In his latest order, Alsup referenced the fact that the judge in PG&E’s bankruptcy case allowed the company to award performance bonuses last year to numerous employees who were not the most senior leaders. But the bankruptcy judge denied PG&E’s separate request to pay an estimated $11 million — and as much as $16 million — in performance bonuses to its top executives, Alsup noted.

When he denied the executive bonuses, U.S. Bankruptcy Judge Dennis Montali said, “There is simply no justification for diverting additional estate funds to incentivize them to do what they should already be doing.” Alsup quoted that statement in his Friday order, and mentioned that Montali allowed PG&E to file another request if it “focuses only on safety and premises payout solely on some form of equity participation” — a step the company has not taken.

“PG&E shares the court’s commitment to safety and recognizes that we must take a leading role in keeping our customers and communities safe from the ever-growing threat of wildfire,” company spokesman James Noonan said in an email.

Noonan reiterated that the safety of the public and employees is PG&E’s top priority and said the company will respond formally by the deadline Alsup set in his order. The judge directed PG&E to submit a written response at least one week before a hearing set for Feb. 19.

John Mader, president of the Engineers and Scientists of California Local 20, said restricting performance bonuses in the way the judge suggested could harm managers whose jobs are not directly related to wildfire safety.

Mader said the members of his union, which represents 3,700 professional and technical PG&E employees, would not be affected by Alsup’s proposal. Mader now also sits on the advisory board for a new wildfire safety division at the California Public Utilities Commission.

Despite his concern about the judge’s proposal, Mader said he is not opposed to the bonus restrictions, because they could “send the message” that wildfire safety is of overarching importance to the company’s work.

“Even just considering this, I think, sends that message to the corporation,” he said.