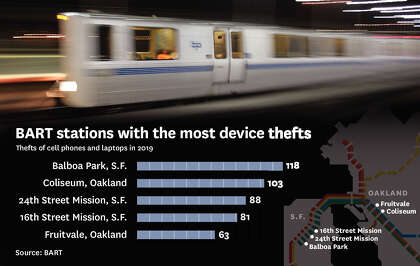 BART saw a significant surge in thefts of cell phones and laptops in the past year, with the No. 1 target being passengers on trains running through San Francisco stations, where 512 robberies and thefts were reported in 2019.

According to BART, the thieves are often juveniles. They eyeball someone engrossed in their device as the train is pulling into a station, then grab the phone or laptop and run off the train just before the doors close. That leaves the stunned victim and any witnesses trapped on the receding train as the thief makes his getaway.

“They can quickly fence the phone for $300 to $400, depending on the model. And they are paying cash,” Alvarez said.

The thieves usually turn off the phone immediately after the grab, so it can’t be tracked by its signals.

“They got smart,” Alvarez said.

Standing next to a train door while holding his phone in one hand and scrolling through emails on his Tuesday morning commute, Murray Connell presented an ideal target as the train approached his Civic Center stop.

“I don’t really think about it,” Connell said when asked about the chances of being robbed. “I feel safe. I’m surrounded by enough people, especially at rush hour. And people all around me are doing it, too.” 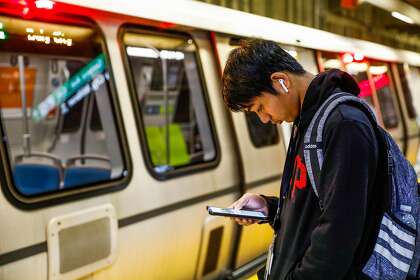 The most likely place to be robbed? On trains running between the Powell Street and Balboa Park stations.

In the East Bay, the Oakland Coliseum Station was No. 2 overall, with 103 reported robberies or thefts last year — almost double the 53 reported in 2018.

“With the Airport Connector, the Arena and Coliseum, people tend to be thinking more about where they are going and what they will be doing, than to their immediate surroundings,” Alvarez said.

Oakland’s Fruitvale Station came in second for the East Bay with 63 reports, followed by West Oakland with 60, MacArthur with 49, 12th Street with 42, 19th Street with 29, Lake Merritt with 26 and Rockridge with six.

In all there were 378 thefts and robberies of electronic devices in Oakland last year. That compares to 309 in San Francisco. The safest BART stations were Pittsburg and West Dublin, which had no reported thefts in 2019, Millbrae, with one, and North Concord and South San Francisco, which each had two.

BART police made arrests in 67 of the robbery and theft cases involving electronics last year. In 36 other cases, an investigation resulted in pending charges against specific suspects who are still at large.

For now, BART police are concentrating their efforts on the San Francisco and Oakland stations.

“We’ve been tracking the problem for about two or three months,” Alvarez said.

These BART stations saw the most phone and laptop thefts,...

In recent weeks, a newly created team of 12 police officers has been riding trains and walking platforms on nights and weekends, with its primary focus the core of San Francisco and downtown Oakland.

The new police patrols will work with BART’s newly approved ambassador program, which starts Feb. 10 when unarmed police staffers monitor the trains and stations as well.

Alvarez is also looking into assigning police patrols to key stations, where data show a high volume of calls for service. Those officers would be responsible for the safety and security of a specific station and not go on roving patrols.

“There’s a new chief in town, and he is setting the tone that officers are going to ride the trains and be on the platforms,” said BART Director Bevan Dufty, whose district includes the San Francisco lines.

“We are going to see if we can put a dent on this,” Dufty said.

San Francisco Chronicle columnist Phil Matier appears Sundays and Wednesdays. Matier can be seen on the KGO-TV morning and evening news and can also be heard on KCBS radio Monday through Friday at 7:50 a.m. and 5:50 p.m. Got a tip? Call 415-777-8815, or email [email protected]. Twitter: @philmatier