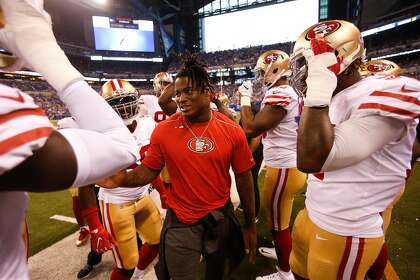 INDIANAPOLIS, IN - OCTOBER 8: Reuben Foster #56 of the San Francisco 49ers stands on the sideline during the game against the Indianapolis Colts at Lucas Oil Stadium on October 8, 2017 in Indianapolis, Indiana. The Colts defeated the 49ers 26-23. ~~
Photo: Michael Zagaris / Getty Images

Raheem Mostert is the running back Kyle Shanahan expected Joe Williams to be.

For those who have forgotten Williams’ forgettable tenure: The 49ers, at Shanahan’s urging, traded up to select Williams in the fourth round in 2017 because he was viewed as an ideal fit for his outside-zone scheme.

Williams, who had briefly “retired” from football at Utah after he’d been dismissed from UConn for credit-card theft, didn’t have much passion for football. And he didn’t have a regular-season carry with the 49ers, who waived him before the 2018 season.

Williams hasn’t resurfaced in the NFL. Meanwhile, Mostert, a player Shanahan inherited when he was hired, has emerged as the 49ers’ lead running back this season after he received just 40 carries in 20 games from 2017 to 2018.

The point: Evaluating football players is an inexact science and you don’t have to bat 1.000 to transform a 2-14 team into a Super Bowl participant in three seasons.

Yes, Shanahan and general manager John Lynch have had their share of whiffs in their wildly successful “brick-by-brick” rebuild.

49ers in the Super Bowl

Consider their first two draft picks: In 2017, they used the No. 3 selection on Solomon Thomas, now a backup defensive tackle, and traded up to No. 31 to select inside linebacker Reuben Foster, who was waived in November 2018 following his third arrest in a 10-month span.

“We got two of our top three players,” Lynch said on their draft night. “We’re thrilled. We’re ecstatic.”

That same season, the 49ers signed Brian Hoyer to be their bridge quarterback. He was benched after six starts.

And they signed inside linebacker Malcolm Smith to a big-money contract. He was waived in November after playing 12 games in two seasons.

In 2018, they signed running back Jerick McKinnon to a hefty free-agent deal. He hasn’t played a snap because of a knee injury.

And they also traded a third-round pick to move up in the second round that year and select Dante Pettis. That hasn’t worked.

Still, the 49ers have kept taking their hacks.

And they’ve had enough hits to make everyone forget about Williams and some other whiffs.

“We’re not going to play scared,” Lynch said to the team website in 2018. “But you’ve also got to know not every one of them is going to work. But we learn from each and every instance.”

The 49ers are going to the Super Bowl and the San Francisco Chronicle is going with them. Subscribe to our Sporting Green newsletter for daily 49ers updates here: http://www.kformygt.icu/newsletters/sporting-green/